The first known artistic representation of eyeglasses was painted by Tommaso da Modena in 1352. He did a sequence of frescoes of brothers efficiently reading or replicating manuscripts; one holds a magnifying glass while the other has glasses suspended on his nose. Once Tommaso had established the example, other painters positioned spectacles on the noses of many of subjects, almost certainly as a representation of wisdom and respect.   One of the most noteworthy developments in spectacle production in the 15th century was the introduction of concave lenses for the myopic or nearsighted. Pope Leo X, who was very myopic, wore concave spectacles when hunting and professed they enabled him to see clearer than his cohorts.   The first spectacles utilized quartz lenses since optical glass had not been developed. The lenses were set into bone, metal and leather mountings, frequently fashioned like two small magnifying glasses with handles riveted together and set in an inverted V shape that could be balanced on the bridge of the nose. The use of spectacles extended from Italy to Germany, Spain, France and Portugal.   From their inception, eyeglasses posed a dilemma that wasn’t solved for almost 350 years: how to keep them on the bridge of the nose without falling. Spanish spectacle makers of the 17th century experimented with ribbons of silk that could be attached to the frames and then looped over the ears. Spanish and Italian missionaries carried the new models to spectacle wearers in China. The Chinese attached little ceramic or metal weights to the strings instead of making loops. In 1730 a London optician named Edward Scarlett perfected the use of rigid sidepieces that rested atop the ears. This perfection rapidly spread across the continent. In 1752 James Ayscough publicized his latest invention, spectacles with double hinged side pieces. These became very popular and appear more often than any other kind in paintings and prints of the period. Lenses were fabricated of tinted glass as well as clear. Ayscough felt that the clear glass lenses gave an unpleasant glare. In Spain in 1763 Pablo Minguet recommended turquoise, green, or yellow lenses but not amber or red. 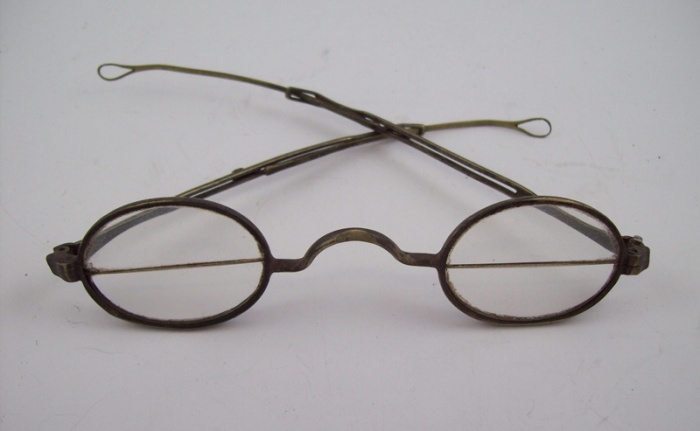 Far-sighted or aging colonial Americans imported spectacles from Europe. Spectacles were primarily for the affluent and literate colonists, who required a valuable and precious appliance. Benjamin Franklin in the 1780’s developed the bifocal. Bifocal lenses advanced little in the first half of the 19th century. The terms bifocal and trifocal were introduced in London by John Isaac Hawkins, whose trifocals were patented in 1827. In 1884 B. M. Hanna was granted patents on two forms of bifocals which become commercially standardized as the “cemented” and “perfection” bifocals. Both had the serious faults of ugly appearance, fragility, and dirt-collection at the dividing line. At the end of the 19th century the two sections of the lens were fused instead of cemented At the turn of the 20th century, there was a considerable increase in the use of bifocals. In 1826, William Beecher moved to Massachusetts from Connecticut to establish a jewellery-optical manufacturing shop. The first ophthalmic pieces he fabricated were silver spectacles, which were later followed by blue steel. In 1869 the American Optical Company was incorporated and acquired the holdings of William Beecher. In 1849 J. J. Bausch immigrated to the United States from Germany. He had already served an apprenticeship as an optician in his native land and had found work in Berne. His reimbursement for the labor on a complete pair of spectacles was equal to six cents. Mr. Bausch encountered difficult times in America from 1849 until 1861, at which time war broke out. When the war prevented import of eyeglass frames, demand for his hard rubber frames skyrocketed. Continuous expansion followed and the large Bausch and Lomb Company was formed.

The monocle, which was first called an “eye-ring”, was initially introduced in England in the early 19th century; although it had been developed in Germany during the 18th century. A young Austrian named Johann Friedrich Voigtländer (de) studied optics in London and took the monocle idea back to Germany with him. He started making monocles in Vienna about 1814 and the fashion spread and took particularly strong roots in Germany and in Russia. The first monocle wearers were upper-class gentlemen, which may account for the aura of arrogance the monocle seemed to confer on the wearer. After World War I, the monocle fell into disrepute, its downfall in the allied sphere hastened, no doubt, by its association with the German military. 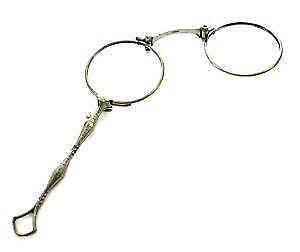 The lorgnette, two lenses in a frame the user held with a lateral handle, was another 18th-century development . The lorgnette almost certainly developed from the scissors-glass, which was a double eyeglass on a handle. Given that the two branches of the handle came together under the nose and looked as if they were about to cut it off, they were known as binocles-ciseaux or scissors glasses. The lorgnette maintained its popularity with ladies of fashion, who chose not to wear spectacles. The lorgnette maintained its popularity to the end of the 19th century.   In the 19th century, the responsibility of choosing the correct lens lay, as it always had, with the customer. Even when the optician was asked to choose, it was often on a rather casual basis. Spectacles were still available from traveling salesmen. Spectacles with large round lenses and tortoise shell frames became the fashion around 1914. The enormous round spectacles continued to be worn in the twenties. In the thirties there was increased emphasis on style in glasses with a variety of spectacles available.  The monocle was worn by only a minority in the United States. Sunglasses, however, became very popular in the late ’30s. history from Wikipedia

I’m an ABOC Optician who brings resources, ideas and inclusion to others in the industry. Join me on your preferred social network for updates on my life in the optical industry. Read more...

This website uses cookies to improve your experience while you navigate through the website. Out of these, the cookies that are categorized as necessary are stored on your browser as they are essential for the working of basic functionalities of the website. We also use third-party cookies that help us analyze and understand how you use this website. These cookies will be stored in your browser only with your consent. You also have the option to opt-out of these cookies. But opting out of some of these cookies may affect your browsing experience.
Necessary Always Enabled
Necessary cookies are absolutely essential for the website to function properly. This category only includes cookies that ensures basic functionalities and security features of the website. These cookies do not store any personal information.
Non-necessary
Any cookies that may not be particularly necessary for the website to function and is used specifically to collect user personal data via analytics, ads, other embedded contents are termed as non-necessary cookies. It is mandatory to procure user consent prior to running these cookies on your website.
SAVE & ACCEPT